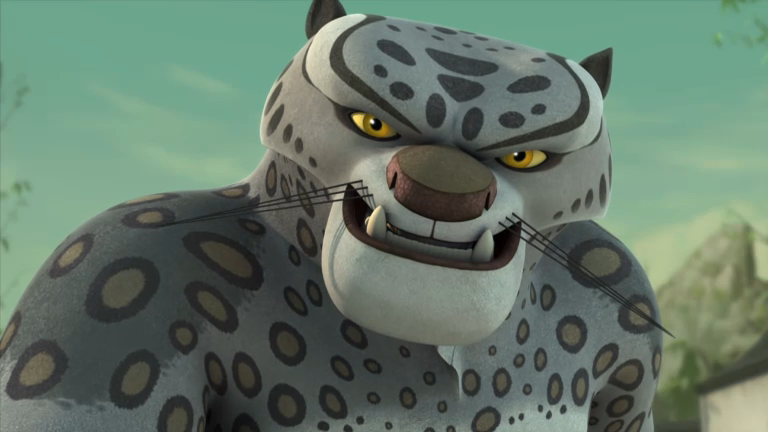 The villain of KFP1 is Tai Lung, an orphan snow-leopard adopted and trained by Master Shifu in the Jade Palace, who so excels at martial arts that he and his teacher both assume Tai Lung will become the Dragon Warrior.

But when Grand Master Oogway decides Tai Lung is not Dragon Warrior material, Tai Lung is outraged. He goes on a rampage and is eventually defeated by Oogway and imprisoned.

In simple temperament terms, Tai Lung is clearly choleric.  He is proud, ambitious, confident, angry and vengeful against those who have wronged him.

He pursues his revenge with the determination and focus of a choleric, having already displayed extraordinary patience, biding his time until the opportunity to escape presents itself.

Having escaped, he immediately returns to his goal of obtaining the Dragon Scroll, convinced that he is – or deserves to be – the Dragon Warrior. 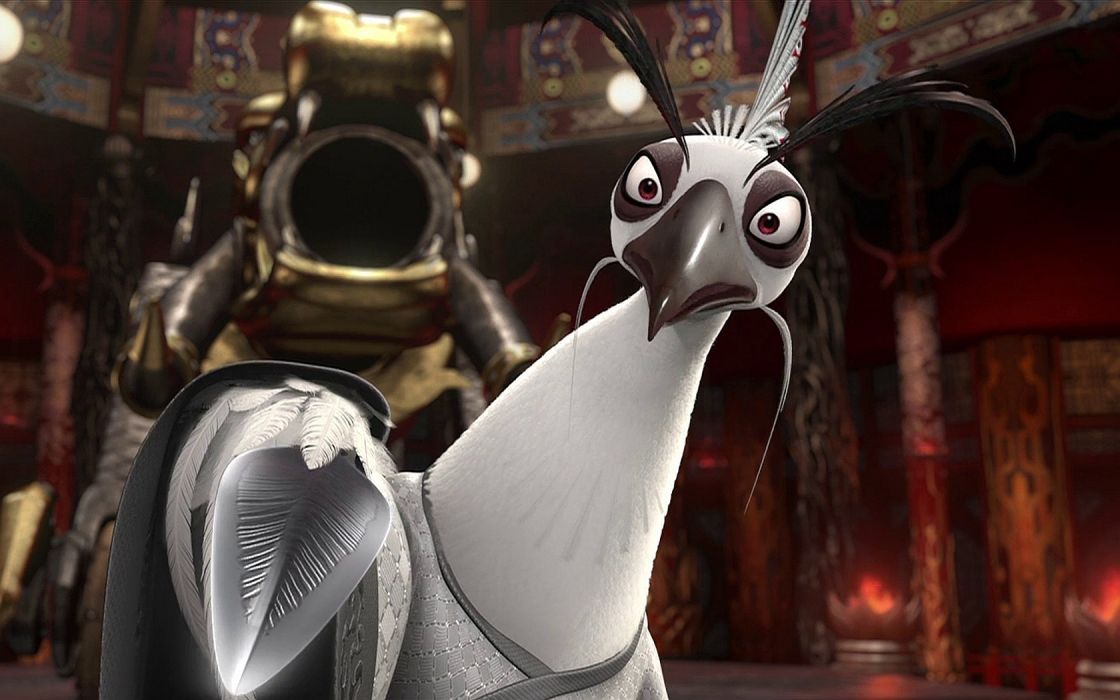 Lord Shen, the villain of KFP2, is the scion of a family of peacocks who ruled Gongmen City and brought joy to the people through their mastery of fireworks.

When Shen begins experimenting with fireworks as a potential weapon, his parents consult a soothsayer who warns that if Shen doesn’t alter his course, he will be defeated by “a warrior of black and white”.

Interpreting the prophecy, Shen takes his army to wipe out all the pandas in China and thereby avoid his fate. On his triumphant return Shen’s parents are horrified and banish him.

Like Tai Lung, Shen is proud, ambitious, confident, angry and vengeful. He bides his time while further developing his explosive new weapons and awaits the opportunity to exact revenge (symbolically) against his now deceased parents, returning to his ancestral home before setting out to conquer all of China.

The similarities between Shen and Tai Lung as cholerics are obvious. Of course they are also villains, which makes the comparison very direct.

Disclaimer: Not all villains are choleric and of course not all cholerics are villains. But cholerics have qualities that lend them to being either great heroes or great villains….great anything, potentially.

But there are specific areas of difference between Tai Lung and Shen that can be observed in real-world cholerics too.

Power in oneself vs power over others

One of the most fundamental distinctions between cholerics is the nature of their ambition, which directly relates to their underlying skills or cognitive functions in an MBTI context.

Tai Lung is a skilled warrior. He is very nearly the most skilled warrior in the world of KFP1, which is the foundation of his pride and also the means by which he pursues his ambition to be recognised as the Dragon Warrior.

Like all the cognitive functions, it’s hard to understand Ni if you don’t have it. As a non-Ni user, the best I can grasp is that Ni-users intuitively know how to do things.

Strong Ni users seem to have a knack or talent in at least one area, sometimes many. They know how to dress well and present well. They take to hobbies and skills with instinctive sureness.

They might not be able to explain to others how they know, because the processing is unconscious, but in art, music, sports, or martial arts, their skill is evident.

For an Ni choleric (INTJ or ENTJ) ambition is channeled through this innate facility.

Hence Tai Lung’s pride and ambition are all about his own excellence, being the best. In his own mind he is the Dragon Warrior, and therefore deserves the Scroll that promises to further enhance his already superlative skill.

Non-villainous cholerics with Ni might describe their ambition in terms of being the best they can be, or wanting to compete with themselves (as an INTJ friend put it).

After all, Tai Lung doesn’t want to conquer all of China, he just wants to be the best.

While Tai Lung is the embodiment of kung fu as an individual skill honed to near-perfection, Lord Shen will happily destroy kung fu in the pursuit of his own ambition.

Instead of the power within himself, Lord Shen cultivates power over others, beginning with his intuitive realisation that the fireworks created by his parents could be used for violence.

This detail of Shen’s origin story is a perfect clue to the kind of intuition he wields: extroverted intution (Ne).

Ne is all about patterns and connections in the external world. As an Ne-user I can fully appreciate Shen’s recognition that the explosive power of fireworks could be “repurposed”. NB: but as a melancholic the idea doesn’t appeal to me!

Shen’s power is almost totally externalised, as represented by the cannons he invented and the army of wolves and gorillas he commands. While he has kung fu skills of his own, they are clearly insufficient to achieve his true aims and ambition.

Lacking the innate talent of the Ni choleric, Lord Shen’s ambitions are not grounded in his own personal attributes. This is reflected in his willingness to destroy his own ancestral home in pursuit of something greater.

Instead of being motivated by his own innate skill, what motivates an Ne choleric like Shen is the self-evident truth that bigger is better:

Soothsayer: “Are you certain it is the panda who is a fool? You just destroyed your ancestral home, Shen!”
Shen: “A trivial sacrifice, when all of China is my reward.”

Yet at the same time, Shen’s Ne is apparent in his respect for the Soothsayer, a fellow Ne user whom he spares in part to prove her wrong, but also in recognition of her own gifts.

As a fellow Ne user, Shen is intrigued by the Soothsayer’s predictions and insights. He sends her away only when he is confident that his own path is certain.

The weakness of cholerics

In practice we can see that different cognitive functions can be exaggerated or diminished through circumstances, formation, and our own choices.

Tai Lung’s excessive ambition was fostered by Shifu, his adoptive father and teacher. Shifu encouraged Tai Lung’s desire to be the Dragon Warrior:

Tai Lung to Shifu: Who filled my head with dreams?! Who drove me to train until my bones cracked?! Who denied me my DESTINY?!?

Things get a bit subtle at this point, but I think the “filled my head with dreams” aspect would relate to Tai Lung’s introverted Feeling function (Fi) in either a tertiary or inferior position; my guess would be inferior.

Fi is all about ideals, meaning, and “dreams”. But in an inferior position, Fi is very rudimentary.

At various stages in life our inferior function is more influential, and it’s common for people to suppress their dominant function and be driven by their inferior.

In Tai Lung’s case, that would mean his dominant extroverted Thinking (Te) was suppressed, and his inferior Fi was engaged and stimulated by Shifu’s excessive encouragement.

So when Tai Lung is denied the long-expected meaning of becoming the Dragon Warrior he is enraged and goes on a pointless and destructive attack on the valley, ending in his defeat by Oogway and imprisonment.

Living under the shadow of rudimentary Fi, he actually weakens his “efficiency”, his Te, and loses everything of value.

A healthier choleric would have had a clearer sense of his own goals to begin with. He would have found a different way to excel, even if that meant spurning the Jade Palace altogether.

Ironically his loss of control showed that he had less confidence in his own abilities, because he had tied them so strongly to the specific “dream” of becoming the Dragon Warrior.

The search for meaning is his downfall not only in this first instance, but in his subsequent effort to obtain the Dragon Scroll.

The weakness of Lord Shen

As an Ne choleric, Lord Shen has extroverted Feeling (Fe) and introverted Sensing (Si) in his tertiary and inferior positions; but in which order?

There’s a case to make for either option: ENTP or INTP. Honestly, I’m not sure which is correct.

But his character flaws certainly relate to extroverted Feeling, which is all about harmony with others. For Lord Shen it was his parents’ horror and rejection following his attempted genocide of pandas that scarred him. Shen thinks his parents hated him, and is unable to reconcile their repudiation of his actions with their parental love.

But even prior to the incident, it is curious that Shen didn’t buy into the foundation of his parents’ power – the colour and joy that their fireworks brought to the lives of ordinary people. If Shen had more well-developed Fe he ought to have been more appreciative of that relationship between his parents and their subjects.

The frightening aspect of Lord Shen’s Fe is that he massacred the pandas without realising the effect this would have on his parents, and without having previously heeded their worries and fears about his attempts to weaponise fireworks.

What went wrong with Shen?

Unlike Tai Lung, there is no indication that Lord Shen was misled, or that his head was “filled with dreams”.

What seems more likely is his parents’ failure to properly educate their son and instill in him more compassion or care for others. By the time he was willing and able to massacre all the pandas in China, it was already too late in his development.

While this indicates a failure to develop Fe, it also suggests (or rather, my brother suggested while discussing this question) an Si-related failure to fill a young Shen with formative memories that would reinforce the virtues of compassion, benevolence, and mercy.

Shen’s attempt to use his intellect (Ti and Ne) to conquer China with gunpowder is a merciless and violent recapitulation of his parents’ “conquering” Gongmen City through the joy and wonder accomplished by their fireworks.

Without an appreciation for the happiness of the people and the virtues that go along with that, Shen would see his own path as a bigger, better, and more glorious version of his own parents’ success.

Cholerics in general are weaker in the “feeling” functions of the MBTI. In Big 5 terms, they are more “disagreeable” than “agreeable”.

Villains with troubled origin stories aside, cholerics tend to be proud, which they might prefer to describe as being objective about their own strengths.

For Ni cholerics, their strength is the innate talent facilitated by introverted intuition, coupled with extroverted thinking (Te) that helps them be very goal-directed and efficient.

For Ne cholerics, their strength is the systematic world-modelling comprehension of introverted thinking (Ti), enabled and given full-flight by extroverted intuition.

Being strong and disagreeable is advantageous if life is a competition. But cholerics struggle when they seek to “win” at non-competitive goals or attributes such as being agreeable.

A common trope for successful cholerics (villainous or not) is to reach the pinnacle of success only to realise that they have neglected or even harmed the things they valued but did not excel at.

That’s why the choleric “solution” is essentially a softening or slowing down where it might otherwise be easier for them to fight, compete, and perhaps win. It’s for cholerics, I think, that we have the spiritual advice to embrace weakness, meekness, humility, and poverty of spirit.